Dear Hans, Peace! The good news is that your Wheels4Life project is very much welcomed by the Malagasy people. To date I have already awarded 14 bicycles to deserving persons and I tried to reach the provinces as well. I gave 10 bicycles to far-flung provinces and 4 to our women here in Antananarivo and 6 more will be given to some far-away place too.

All of them are very grateful to you for sharing your blessings with them. They could hardly believe that they would ever own a bicycle one day and this will help them a great deal. Dear Hans, Peace!

Here is the photo of Charles Razafindrakoto, the sculptor. He lives in the forest of Ambanivato Alarora some 20 kms; away from the city of Tananarive. He is 57 years old and has 4 children. His whole family including his wife are doing woodcarving. When we knew him, he did not have a decent home but now that he brings his products to us he has already built a modest home for his family. He walks 10 kms to reach the road which will take him to the city and he has to carry a heavy load of his wooden products. 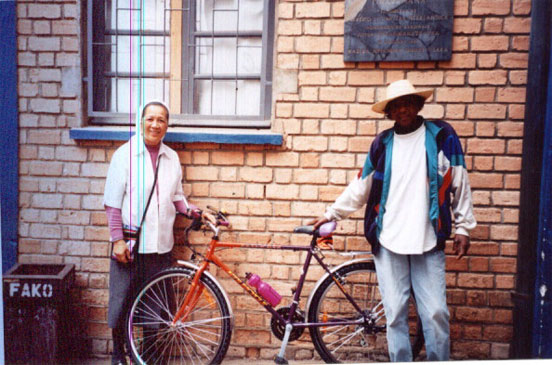 With his new bike he could now load it in his bike and bring his goods handily to the city. He is a very simple man who wants to live the Malagache way. He loves to walk barefooted and even if we offered him a pair of shoes he prefers to be barefooted for he wants to be connected with mother earth. He also wears all the time his malagache hat and won’t part with it even inside the building. The facial expression of his woodcraft is so well done and he specializes on angels and virgins and nativity sets. Personally he has a very interesting story.

According to him he used to pasture cows, zebus, here in Madagascar, a family is said to be rich according to the number of cows he own. He did not own any cow for he is a poor man but he loves to take care of cows. So he works for rich families and pastures herds and herds of cows. these herds have to be led to pasture lands and that means he has to lead them further south. He would be walking with them and camping out with them for months and months. If he is able to lead them as far as Tulear and back to Antananarivo he is paid one cow. So he has done this many times so that he was able to have a herd of seven cows at one time. After that he settled and just wanted to take care of his seven cows. But this was shortlived since a group of bandits armed with guns came one night and threatened to shoot him if he did not give them all his cows. So he lost all his cows. He was so frustrated he no longer wanted to do any pasturing and resorted to woodcarving.

He gradually became proficient but he was not paid well for his beautiful work. One day one of our sisters bought his woodcarving and wanted to order more so she was introduced to Charles. Sister was able to interview him and realized that he needed our help. From that time on he started delivering his products to our centre and we manage to sell them at a good price so he could improve his home. He is very grateful and happy about his owning a bicycle and would like to thank you from the bottom of his heart. He indeed deserve all the help that we have been extending him and all the members of his family are grateful.

We appreciate your support, no donation is too sma

Just in time for #givingtuesday and the Holidays w

Having mobility (a bicycle) or not can make all th

Wheels 4 Life, life hasn’t been any easier since

Not exactly the reason why we distribute bicycles

This bicycle was donated by us to this lady in Uga

She is stoked #giveabikechangealife #ride #bicycle

Filming today w our founder and the folks from Bay

@teamw4l is back in action with their first race w

More bikes were distributed in Uganda w one of our

Happy Holidays from everybody at Wheels 4 Life. T

Very happy to say that today we with the massive c

Happy Holidays from Wheels 4 Life. We have cool i

Bicycles are used in many ways to improve liveliho